Desmoid-type fibromatosis (DF), a tumor that forms in connective tissues, is rare enough that gathering sufficient patients for randomly controlled prospective studies can be immensely difficult. As a result, the data needed to inform clinical treatments for the disease remains sparse.

Angeline de Bruyns (IMP Class of 2020), under the supervision of medical oncologist Dr. X. Feng and colleagues at BC Cancer—Victoria, is helping fill that knowledge gap with her recently published article “Evolving Practice Patterns Over Two Decades (1993 – 2013) in the Management of Desmoid-type Fibromatosis in British Columbia” in Clinical Oncology. 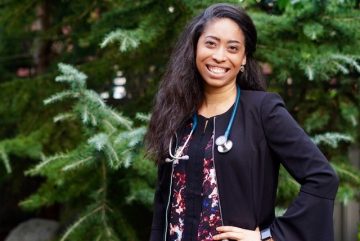 Angeline de Bruyns (IMP Class of 2020) hopes to complete a residency in family medicine. As a family physician, she expects to have a vital role in facilitating cancer prevention and cancer screening for her future patients.

Angeline’s retrospective study reviews the medical outcomes of 227 patients diagnosed with and treated for DF. “These retrospective reviews can be very helpful in informing other clinicians who treat DF as to which treatments have been used and which of those are effective and safe for patients,” she explains.

Often found in the abdomen, arms, and legs, DF is varied in nature. Some cases are aggressive, while other don’t require treatment for months or years; some regress, while others reoccur and can be locally invasive. The fact DF has such varied characteristics, in combination with its rarity, is one of the reasons it’s difficult to come up with a standard treatment for the disease and why management practices have changed over the years.

In her study, Angeline found that the DF management practices used in BC—including active surveillance, surgery, tamoxifen, radiation therapy and chemotherapy—changed in line with the evolving expert opinion of the 20 years in question. The study also showed that the outcomes of patients treated with active surveillance or upfront surgery were consistent with other published reports. Most notably, active surveillance was associated with spontaneous regression and long-term disease control.

“This validates that our study population is similar to those that have been studied elsewhere,” Angeline says. “Essentially, that means that the new conclusions and treatment recommendations that we draw from our research can be applied broadly to other DF patients.”

The most important new conclusion Angeline drew from this study is that primary radiation therapy may be a viable option for patients who are not candidates for surgery or active surveillance.

Existing guidelines do not recommend this treatment as an initially viable option out of concerns for harmful side effects and unclear efficacy in treating the disease. Instead, guidelines recommend tamoxifen or other systemic chemotherapies for inoperable tumors. However, the study results suggest radiation therapy is therapeutically effective at managing DF and may be better or at least similar in controlling the disease than the currently recommended treatments. The results also suggest radiation therapy side effects are limited and largely better tolerated than the side effects from tamoxifen and chemotherapy treatment.

“What has been somewhat unconsidered is the general improvements that have been made in radiation therapy techniques and delivery methods over the past two decades, making it a much safer and effective modality of treatment,” says Angeline.

That said, researchers cannot reliably assess the long-term toxicity of radiation therapy using the results of this study as there is a lack of long-term follow up with the patients. As such, this research will not immediately change DF treatment standards. Future studies are needed to assess the continuing effects of different treatments.

“We still hope that our study results will inform those clinicians involved in developing new consensus DF treatment guidelines, and that radiation therapy may be considered and discussed as a viable option for patients who are not candidates for surgery or active surveillance,” says Angeline. “This research will hopefully increase awareness for the available effective and safe treatment modalities, facilitating patient access to treatments that have the potential to improve the morbidity and mortality associated with this rare and complex disease.”

Angeline, who is in her fourth year at the IMP, conducted her research as a FLEX project in Year 2. Prior to publishing her findings, she presented her work at the Toronto International Sarcoma Symposium as a poster presentation. After graduating with her MD next May, Angeline hopes to complete a residency in family medicine. As a family physician, she expects to have a vital role in facilitating cancer prevention and cancer screening for her future patients. Later in her career, she plans to train to do the work of a GP oncologist, a path inspired by mentor Dr. Stephen Ashwell, who is a GP oncologist for the BC Cancer Agency in Victoria.