Reviewing Research on Anemia Among Indigenous People of Canada

Dr. Natasha Young (IMP Class of 2022) knew she wanted to research anemia before she even began medical school. After years of personal experience with poorly managed anemia, she hoped to contribute to our understanding of this often-complex condition.

It wasn’t until she went to Alert Bay for her Year 4 rural family practice rotation, however, that Natasha found her research focus. While speaking about the challenges of diagnosing, treating, and managing anemia in the community, Natasha says local physicians noted they saw a lot more Vitamin B-12 deficiencies in Alert Bay’s Indigenous community than they did while working in more urban centres like Victoria.

“I just got to thinking about it and thought, ‘Indigenous people may actually be at a higher risk [for anemia] for a number of reasons,’ and I just wanted to explore it,” she says. 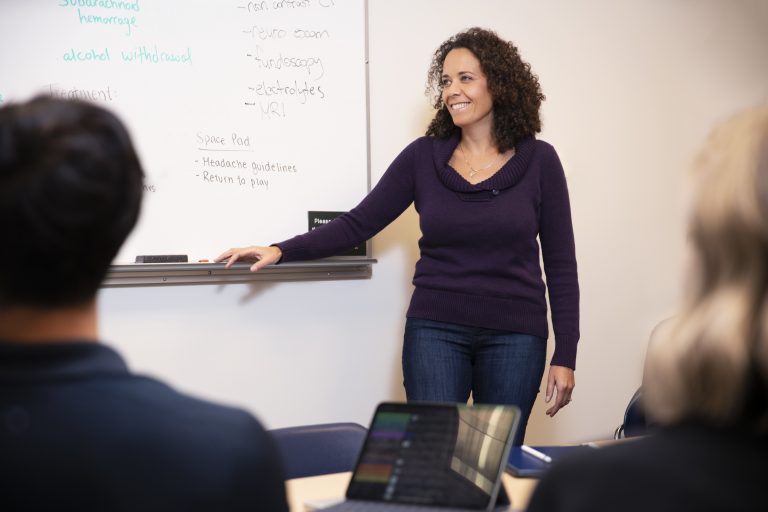 Dr. Natasha Young at the IMP.

Before moving forward with research of her own, Natasha decided to conduct a literature review to find out what we already know about anemia in Indigenous populations in Canada. “I wanted to see if this idea was based in a personal bias or a valid research topic,” she says. Natasha is Afro-Indigenous (Nova Scotia Mi’kmaw and the African slave trade) on her mother’s side and grew up on Tsimshian and Nisga’a territory, near Terrace, in northern BC. She also has familial ties to the Gitk’san community of Gitanyow.

Natasha conducted her independent project during her Year 4 research blocks, with Dr. Patrick C. Nahirney (Associate Professor of Anatomy and Histology, Division of Medical Sciences, UVic) as supervisor. Anemia is a broad topic, so she narrowed her focus on two specific forms of the condition: microcytic anemia, which is typically caused by iron deficiency, and macrocytic anemia, which is typically caused by Vitamin B-12 deficiency.

Through her review, she found research showing Indigenous populations can have disproportionately high levels of illnesses and health conditions that predispose a person to certain forms of anemia, including diabetes, obesity, and kidney and liver issues. Food insecurity is another major risk factor many people face. This limited access to healthy food containing valuable micronutrients, such as Vitamin C to help with iron absorption, can stem from a number of issues associated with lower socioeconomic status, living in remote locations, and a shift away from traditional diet.

Natasha’s work also highlights the significant lack of information on anemia – and other health topics – among Indigenous people of Canada. She only found about half a dozen papers from northern Canada, plus some similar data from Australia, New Zealand, and the United States in her review, and that research mainly focused on pregnant women and children.

“There are a lot of gaps in our knowledge and unanswered questions,” she says, adding this issue is far more complex than simply a lack of representation in health research. Colonization practices have had deeply negative consequences on the social determinants of health of Indigenous people in Canada as compared to the general population. “First Nations and Indigenous health in general has been overlooked,” she says.

With her literature review validating the idea to research microcytic and macrocytic anemia levels among Indigenous people, Natasha is excited to hopefully help fill in some of that knowledge gap. After submitting her completed manuscript for peer review, she plans to propose a chart review of Alert Bay’s patient population. Specifically, she would like to see if there are disproportionately higher rates of iron and Vitamin B-12 deficiencies and other anemia risk factors among the community’s Indigenous residents than among the non-Indigenous residents.

“Alert Bay, which is located on Cormorant Island, is about 50/50 Indigenous and non-Indigenous by population and geography. It’s an interesting place from a research perspective,” she says.

Natasha first plans to pitch her research idea to the community and health administrators this summer “to see if I have their blessing.”

“I want to proceed carefully. I don’t want to perform helicopter research, which is where you take your data and leave,” she says. “It’s really important to me to follow the principles of OCAP, engage community members, and have open communication and dialogue.”

OCAP – which is an acronym for the First Nations principles of ownership, control, access, and possession – asserts that First Nations have control over data collection processes in their communities, and that they own and control how this information can be stored, interpreted, used, and shared.

Natasha, who graduated this May, will also return to the IMP this fall to teach the Year 1 and 2 Histology labs.